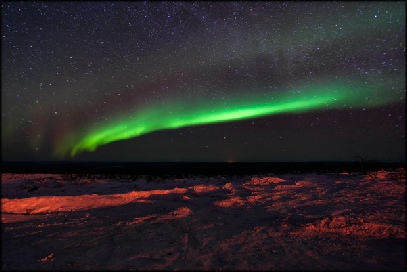 I ventured up to Northern Alaska for what was a once in a lifetime experience to photograph the Aurora Borealis--the Northern Lights. With five other photographers and the workshop leader, Andy, we were to spend two days in Fairbanks before driving 270 miles north past the Arctic Circle to a town named Wiseman-population 22--for five days and four nights of photography.

The last night in Fairbanks, after photographing the amazing ice carving championship in zero degree weather, we headed up at 10:30 p.m. to a mountain 40 minutes from Fairbanks to hopefully see and photograph the Northern Lights. Arriving atop Murphy Dome, a faint band spread across the sky. Nothing spectacular, but we all hauled out our photo gear and took pictures for about half an hour in the now below zero degree temperature.

When the lights faded away, Andy suggested we climb back into the van to "warm up" and wait a bit to see if the Northern Lights would put on a show. He couldn't turn on the van because the headlights would automatically go on and he didn't want to disturb the few people around who also came to view any potential aurora display.

So we waited-midnight, 12:30, 12:45. The van was freezing, but we endured. Andy informed us that if we didn't see any major display within 10 minutes, we would head back down to the hotel and ready ourselves for the six hour drive the next morning. At 12:55 and no visible aurora, Andy told us it was time and turned the ignition to start the van. Click, click, click was all we heard. He said simply, "Oh, no." He tried again-click, click, click. Nothing. The headlights worked fine, but the car seemed to have a dead battery. He checked his phone. No service. Everyone else checked their phone with the same result. Andy jumped out of the van and headed to the last car that was still in the area just as they were pulling out. He asked them if they could call the authorities and tell them about our predicament as soon as they had cell service. He then climbed back into the van and tried one more time to start it. Again, nothing.

Andy decided it was time to distract us from the intense cold by asking us some questions: What was the most memorable place we've photographed? What were some destinations on our photo bucket list? By the second round, the responses were getting shorter and more sporadic. The wind had picked up, making an uncomfortable situation even worse. I tried to ward off the cold by huddling into a ball. My body ached. My fingers and toes were frozen appendages. The van was silent. I started to lean back and forth like an old lady in a rocking chair on her front porch-forwards/backwards, in constant motion, anything but sitting there motionless letting the cold envelope me.

One-thirty--nothing but eerie silence. A half an hour went by with no help in sight, no warmth in the van and no tow truck saving us from what I envisioned eventually as seven frozen corpses discovered inside a van on a windswept mountain top in the middle of winter in the Alaskan interior.

At 2:15, Andy decided to check his cell phone--SERVICE! He quickly called AAA to send up a truck with jumper cables. As he was explaining our situation, the call abruptly ended. He immediately asked the person beside him if his phone had service. YES. Andy decided to call 911 this time. He spoke for about a minute until that call was lost as well. Undeterred, he redialed and got another 911 operator. After explaining the situation, the operator replied that a trooper had already been dispatched. We would be saved and would only have to endure 40 minutes of frigid misery.

At 2:30, the fellow next to me declared that he had to take a leak. I followed him out. Sitting in the frozen van was just too much for me. I jumped out and immediately felt the wind on my face, which had gained strength since the time we first became stranded. I started to pace, ignoring the lack of feeling in my fingers and toes. I walked 15 yards into the wind, then did an abrupt about face and walked 15 yards in the opposite direction. An occasional jump or flinging of the arms interrupted my pacing. Slowly an aurora display developed along the northern sky. It grew in intensity, first a band, then two, then a couple of arcs and finally a show of shimmering curtains of green light dancing across the sky. The show was spectacular, yet no one emerged from the vehicle to photograph. Had they succumbed to the cold? Or were they just like me, too frozen to care and with only one thought in mind--rescue.

At 2:50 the state trooper's car lights appeared down the road. Andy popped out of the van as the trooper approached. The trooper asked Andy if everyone was okay and if anyone was showing signs of hypothermia. Then he pulled his SUV around to the front of the van and opened the hoods of both vehicles. After attaching the jumper cables, the trooper appeared perplexed. I drifted over. "Usually I hear the battery drain on my car when I attached the cables," he said. "I can't hear anything." I winced-what if the problem wasn't with the battery? I couldn't bear to spend any more time on this frigid mountain. After the two men discussed the situation briefly, Andy hopped back into the car in another attempt to start the van. With one turn of the ignition, the car immediately turned over, the hum of the engine almost overwhelming in my frozen state. I was giddy with excitement as I walked over to the trooper as he was putting away the cables. I told him I was from Illinois, and to get a feeling for Alaska, I had been religiously watching Alaska State Troopers on the National Geographic Channel. I told him I absolutely loved the show. He thanked me, then said that he had been featured on a few of the episodes. I asked him his name. "Officer Guerin," he replied. I told him his name sounded familiar. Excitedly, or perhaps exhibiting the first signs of hypothermia creeping in, I repeated myself, blabbering again that I just loved the show. He thanked me once more as I headed for the van.

The 40 minute drive back to the hotel did little to relieve the cold that I was feeling, but relief was surely imminent. By 3:45 a.m., I was in bed, my fingers and toes having warmed up to the degree of an ice pack destined for a lunch cooler. But all was well with the world, as cruel and cold as it was here in Alaska. And yet, as it turned out, this experience was not the coldest that I had felt on my excursion to the wilds of Alaska on this trip. But that story is for another time and place…

and how I almost froze to death.

Back to Alaska gallery

My first view of the northern lights from the parking lot on Murphy Dome near Fairbanks, AK